For over 40 years, Pisces has been serving sport fishing enthusiasts providing first class boats, crews, tackle and service with integrity and dedication.Pisces is the premier sportfishing fleet worldwide. Based in Cabo San Lucas, Mexico, Pisces began as a love for fishing by Peter Ehrenberg and his two sons Peter Jr. and Marco.
‍
They commissioned three 28 ft Boats from a local boat builder in La Paz, Baja and decided to get into the sportfishing business. Peter Sr. returned to his steel business in Mexico City and Peter Jr. moved on to other ventures, leaving Marco along with his new brideTracy (a Brit who he met in the Canary Islands and proposed to 5 days later) to take over. With their hard work ethic, passion for service and striving to showcase the incredible beauty and natural resources of the area, they soon began building the fleet into what it is today.
‍
Listening to their clients, they adapted and added different options aside from the regular cruisers, modern, hi-tech and top of the line boats were added to the fleet and a whole range of service evolved with organic growth into luxury yacht charters, yacht sales, Sotheby’s real estate, restaurant, villa rentals, fuel dock and marina. Where Pisces saw a need they moved to fill it motivated by giving the best service possible at a fair price and to present themselves as ambassadors for the town they are passionate about.

Pisces is invested in long term relationships with not only their clients but with their employees, who are the greatest asset of the company. Conservation for future generations is important to Pisces and they work diligently to teach and implement catch and release philosophy as well as providing data to scientists for the last three decade

A Cabo Legend In The Making

Pisces Sportfishing started off as a family owned and operated business out of the City of La Paz, Baja, Mexico in 1978 with one 28 ft boat. A couple of years later we moved to Cabo to take advantage of the year round fishing and emerging tourism market.

Since then we have grown to be one of the largest and most respected charter fleets in Mexico as well as being recognized worldwide by fisherman and conservationists alike.

To keep pace with the times and the growth of a more sophisticated market we have gradually added more vessels and can now offer everything from the basic Baja Panga (skiff with outboard motor) to mega yachts. Still the favorite of most Cabo visitors are our Standard cruisers, seaworthy, clean boats between 28 and 31 feet, with very experienced crews which are great value for money.

We also offer slightly larger, 32 to 48 feet, newer model, vessels with more comfort like salons and air-conditioning, known as our Mid range cruisers.Large Sportfishers over 50 feet are also available usually being new high tech vessels with great speed and more range. Rounding out what we, are the Luxury cruisers, most being multi-purpose - fishing, cruising, snorkeling, diving - ideal for those wanting to be pampered with the very best or to spend a week aboard, cruising the Sea of Cortez.

What sets us apart are the relationships we form with our clients, long-term; our focus is service, value for money and experienced crews. We have been in Cabo for almost three decades and have a proven track record that keeps our guests returning year after year. 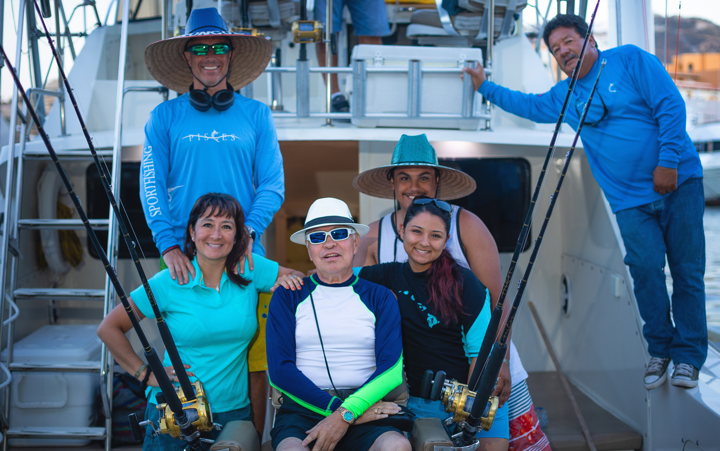 Our purpose, for over 30 Years at Pisces Group Cabo, is to make a genuine difference in your travel or lifestyle experience not only in your accommodations but also in our superior customer-service standards with respect to real estate, luxury yacht charters, sportfishing, marina and entertainment with our restaurants and nightlife.

From the owners down to our expert teams, we strive to set a common direction by incorporating extremely detailed-oriented services in conjunction with our discerning, luxury villa and condominium accommodations. Our personnel who will assist you throughout the vacation or lifestyle process are full-time employees of Pisces Group Cabo. We optimize Los Cabos’ broad range of diversity from desert to beach and, of course, the beautiful seascape we are known for worldwide.

We have superb catch rates, but also promote the conservation of sport fish especially marlin. Pisces was honored with the Lifetime Achievement Award for Conservation, given by I.G.F.A (International Game Fish Association) and several of our captains have been the recipients of the Billfish Foundation Award for Most Striped Marlin Released Worldwide in a single year.

Take a look at our rates and packages. For those on a budget you can fish for as little as $112 per day (based on 4 sharing one of our 28ft Uniflites) and for those after pampered luxury you can charter your own private 105ft luxury yacht.

There is no other charter company in Cabo that can offer you the experience, range of boats and packages to meet any need.

Statement of Values and Standards of Conduct

By fulfilling our purpose since our company’s inception in 1978, Pisces Group Cabo has become a destination leader in the real estate, sportfishing, yachting, marina, restaurants, commercial leases, leisure and lifestyle industries.